While an impinging jet has been widely investigated because of its remarkable convective heat transfer performance, the impingement of a sweeping jet that undergoes periodic oscillation has drawn little interest. We experimentally examined the heat transfer of a sweeping jet impinging on a flat wall for several Reynolds number and nozzle-to-plate spacings and discovered an unsteady flow structure to characterize heat transfer capability. The local Nusselt number on the wall was evaluated by measuring temperature with thermocouples, and a flow was visualized quantitatively using particle image velocimetry. The distribution of the Nusselt number is different from that of a round jet, exhibiting two distinct regions. Near the center of a sweeping jet, a high Nusselt number zone is formed without a noticeable peak commonly observed in a round jet. Away from the central region, the Nusselt number decreases monotonically. The trends of the Nusselt number in the two regions are correlated with the first mode of the flow structure obtained by proper orthogonal decomposition (POD). The boundary of the two regions is a local minimum of the first POD mode near the wall, and the magnitude of the first POD mode is large in the central region of a high Nusselt number. We observed that the distributions of mean lateral velocity and lateral velocity fluctuation differed between the two areas, implying that both quantities should be considered for the analysis of heat transfer performance. 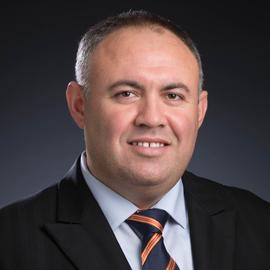